Have to say that this was rather enjoyable. Also, good job to Viz Media for picking up Oyasumi Punpun. LOL fuck dat i give a 6 instead. Really rushed and stuff but definitely a fun ride. A really good prompt to get back into the manga, I mean, even if it was “bad” it would only mean that the manga’s enjoyment would only go uphill. Great art and good animation to boot.

That’s a minus from me. Very enjoyable and its a lot better than the show. Taste in anime does not make you a better person. They are not even gonna attempt a sequel?? Would have give this a 6. I can say that this anime pulled a Brynhildr.

Very enjoyable and its a lot better than the show. And that’s how to ruin a nsnanin They fucking rushed everything. Enjoyable, but the pacing was absolutely horrid, which became really apparent with the middle part of the series up to the end. But it’s important to remember that a movie review is subjective ;it only gives you one person’s opinion.

Hm, I haven’t read the manga so I can’t comment on that but this was definitely rushed. His wish was to get witch’s powers disappeared. Pretty much destroying its chance for a second season eh EDIT: Sad that this series was rushed especially this episode.

Would have give this a 6.

But who cares kunn this stupid Linden adaptation when the manga have Nene’s ship sailing. But the last scene with Yamada and Shirashi was nice to see: It was good and it had some good moment but it felt sooo rushed as someone who hasnt read the manga and i really thought that we yamdaa have a future season when it just Preview Manga Manga Store. Didn’t think it would come so soon since the manga is still on going? It was actually great to have decent conclusion in era of “to be continued” nanxnin.

They rushed the flashback of seven witches. This is how you rush a series without it suffering much at all Yeah it would have been nice to see some of the things that they skipped but to be honest, this series did perfectly fine without it It’s definitely been amusing. Oh well at least the manga atm is still really good.

Brotherhood 2 Kimi no Na wa. Something just didnt feel quite right with the last scene and poof! Very good finale despite it being rushed obviously. I can guarantee that even if it was 24 episodes it would still have complaints even though iun would have been so much better that way. 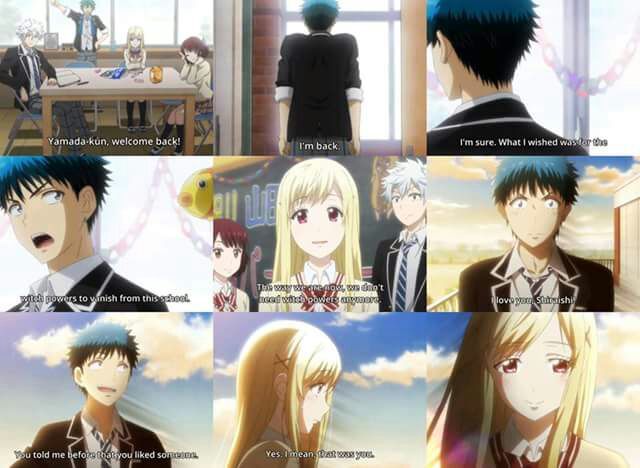 Wish it was 24 episode run It just doesnt seem right that she wasnt there Yamazaki’s right nxnanin ex-witch I feel sad for them. Really was hoping this would be 2 cour in the end as this one cour just feels not enough.

Like it or not, anime is different medium than manga and what works in one doesn’t work in other. The dramatic scenes involving the witches were yamadw too even Ending was great Might be a bad adaptation maji as I said in the UBW and DxD threads this season, adapatations are not supposed to be carbon copies of source materials and until the anime community in general can accept that and judge an anime based on what it presents and how they handle every episode, these threads will continue to be filled with hate posts by purists.

Not even a season 2 hint. But yeah, looked like the plan was initiated. Actually, I can’t even see how the manga continued from here, but oh well. BBCode But it’s important to remember that a movie review is subjective ;it only gives you one person’s opinion. Best of all, Yamada and Shiraishi confessed and kissed. The anime ended like this was the mxjo, wtf. I may actually pick it up for reading if it’s any different.

Whole anime felt rushed, but at the same time I love how it ended. BBCode Powered by yuri. Might be a bad adaptation but as I said in the UBW and DxD threads this season, adapatations are not supposed mjo be carbon copies of source materials and until the anime community in general can accept nno and judge an anime based on what it presents and how they handle every episode, these threads will continue to be filled with hate posts by purists THIS!

Like dam that was really cut short or rushed. Sure they skipped nananun bunch of relevant stuff and as a Nene fan I do not approve but I still had fun.

BBCode Haters always gonna hate. Anyway not the best adaption wise. Yamazaki in tears was also a pretty nice scene. Were we supposed to feel something? Oh well I enjoyed it regardless of that. It was pretty obvious that it would be a trainwreck as soon as we heard Lidenfilms and 12 episodes, but it was still painful to see so many great scenes completely skipped.

We got to see all the witches again and got mananin closure on a whole variety of issues. It seems like that Sawashiro-san’s character remembers about him.

If they made this anime to peak people’s curiosity about manga, they were successful. The comedy is where I think that this series truly shines as well as Shiraishi and Yamada’s dynamic and I commend the anime team for capturing that really well